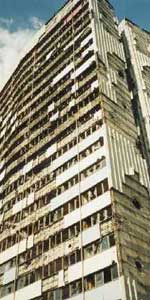 In June 2000, I had a phone call out of the blue from an ex-colleague of mine, asking me if I would help her with training in office skills - file and paper management, diaries and conference arranging, telephone skills. Fine, I said. Where? Bosnia, working for OSCE - the Organisation for Security and Co-Operation in Europe. "The Organization for Security and Co-operation in Europe is a regional security organization whose 55 participating States are from Europe, Central Asia and North America. The OSCE has been established as a primary instrument for early warning, conflict prevention, crisis management and post-conflict rehabilitation under Chapter VIII of the Charter of the United Nations. " (From the OSCE website.)

So now you know. What it seems to boil down to is that the country receives assistance - personal and financial - from the international community, to "find its feet" again after three years of the most extraordinary bloodshed imaginable; to recover after being shot at by sniper bullets and bombarded by tanks, all in the name of that wonderful humanitarian concept known as "ethnic cleansing".

"You're going where? Isn't it dangerous?"

Not whilst I was there. There remain the holes from the sniper bullets all over the walls of the (very beautiful) buildings; there are houses and tower blocks, particularly on the outskirts of the town (see right), which are no more than windowless shells, but remain. Partly as a monument to what the town went through, but more practically because in most cases, the money to rebuild simply isn't there.

Sarajevo itself is lovely. Set in a valley, there are views up the green hills from most places in the main centre. Wide pedestrian precincts are full of cafés, shops and bars, especially frequented in the evenings when whole families promenade up and down Obala Kulina bana; the river Miljacka reminded me of the Liffey that flows through Dublin, punctuated by tiny bridges. Some of the bridges are named for those murdered on them.

The young people who were coached by my colleague Andrea and myself were on average in their early twenties (and most of the women seemed about six feet tall and size ten!). Their English was superb, and as always, I felt ashamed of the lazy English assumption that the rest of the world will learn our language. They were great students, attentive and enthusiastic, and we were delighted at how many ideas they felt able to take back to their offices.

Most had lived through the war, and lost friends and relatives to the sniper bullets; most have their horror stories. Like the little boy who was the mascot for a post-war celebratory football match, and who ran across the pitch at the start of the match; only to be blown up by a mine. (Bosnia is still full of unsafe areas which are full of mines.) Like the woman who showed us around her much-loved home town, who told us that her father had been killed, and her husband (who was our chauffeur for the afternoon) had been lucky to survive the bullets in his neck and arms.

There are four major faiths: Jew, Muslim, Orthodox and Roman Catholic. On Saturday, our last afternoon, we were taken up onto the hillside to look down on the town, its river, its multiple cemeteries, buildings destroyed and buildings rebuilt. At 5pm, the Muslim "call to prayer" is sounded from loudspeakers on the mosques. There are over 370 mosques in Sarajevo. Mixed with the bells calling the Roman Catholics to mass, it was an extraordinary sound.

I don't yet understand what ignited the siege in Sarajevo (it wasn't a war; they had no weapons of their own to turn it into a "fair fight"). I'm reading all I can to try to find out. What I do know is that, since the "ordinary people" have been left in peace to live "ordinary lives", they live and worship comfortably side-by-side. They intermarry, and have friends from all corners of the community. I'm left with a very confused view of humanity. I am trying to comprehend whatever it was that removed the barriers of human conscience and permitted the atrocities; at the same time, I have seen the evidence that real people still live in Sarajevo, living and loving and working - despite the shadow of the bullet-holes.

Most of all, just five years since the bloodbath, the streets of Sarajevo are not haunted - either with the spirits of the dead, or the bitterness of the living. And that is what gives me hope.