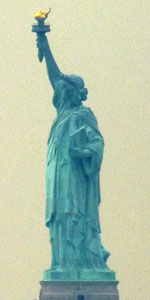 Our last visit to the United States of America was exactly ten years ago. On that occasion, we visiting just one state: Florida (and were told by more than one person "You haven't been to the USA, you've been to Florida. It's different.").

The idea arose when it became clear that Selwyn was due for a sabbatical. The clergy are encouraged to take a long break - a combination of holiday, study and spiritual retreat - once every several years (it varies by diocese, but normally in excess of ten or twelve years). Selwyn's previous such break was in 1999, so after thirteen years he was ready for a complete break from parish life.

Being self-employed, Cassie doesn't have the luxury of being able to take three months off (no work, no pay), but the holiday at the start of this period was something she wasn't about to be left out of; so it was decided that the first four-week period would be devoted to travelling, leaving the Rev to continue with study and meditation thereafter.

Having the great good fortune to have several lovely friends in far-flung parts of the world, we settled on the mid-to-Eastern part of the USA. Stopping off for one night in each direction with our good friends Neville and Sarah, close to Heathrow, we embarked on a wonderful journey.

The descriptions below explain briefly how we came to be spending time with our hosts in each place. Many of the connections between ourselves and said hosts are nothing if not examples of sublime serendipity.

Click on the images below for a full page of photographs for that stage of our journey.

Click here to view the map for this journey.

In the spring of 2004, Selwyn was asked to officiate at the funeral of a family member. Joan was one of the group of Tillett connections that we had met up with as a result of genealogical studies (her husband's lineage connects with Selwyn's some way back), and very sadly she passed away just a couple of weeks before a major wedding anniversary, to which we had been invited. Cassie created the order of service for the funeral, and in doing so, asked the family 'what was Joan's favourite flower?' The answer came back : an iris. So off she went to locate an appropriate image. After some browsing around, she came across a beautiful photograph which was perfect. Not wanting to take advantage of the photographer, she got in touch to ask permission; and Pat was happy to agree. An email correspondence developed, and when Cassie cautiously suggested that Pat's website was not a worthy vehicle for her beautiful photos, the die was cast! Cassie created Pat's new website (and has since then redeveloped it further); but more importantly, they have stayed good friends ever since. Pat and her partner Frieda visited us in the UK soon after our arrival in Norfolk, in 2005, and we were thrilled to be able to make the reverse journey across the pond.

Our time with Pat & Frieda was spent in what we are assured was an uncharacteristically beautiful autumn; temperatures around 75 degrees and bright blue skies. Visits were made to the Minnesota Arboretum, to St Mark's Episcopal Cathedral for an inspiring Sunday service, to Hawk Ridge, to Duluth and Lake Superior, and to the beautiful Como Conservatory - to name but a few. We were also completely 'wowed' by the magnificent Church Basement Ladies at the Plymouth Playhouse: Minnesotan Lutheran humour might possibly have gone over our heads, but no. We knew and loved these women - we've met them in the Church of England too... 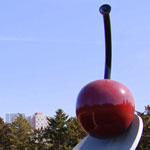 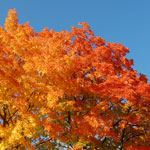 We've known Georgina for longer than she cares to admit. When we met back in 1991 through Imperial Opera (now Imperial Productions), Georgina was one of the (much younger!) members. Recently she has not only married the lovely James and produced the gorgeous Freddie, but has also wound up living in Chicago.

We were only able to spend a long weekend in Chicago, arriving on the Thursday and leaving again on the following Monday, but we were entranced with this magnificent city. The temperatures had dropped (it was a bit of a shock to move from 75 to 45 degrees in one fell swoop), but we enjoyed mostly blue skies, and fell in love with the places we saw. The much-recommended architectural river trip, while freezing cold, was fascinating and impressive; Nordstrom's department store, with its magnificent cafe; Navy Pier, complete with exhibition of stained glass of all eras; a truly magnificent production of Sondheim's Sunday in the Park with George at the Chicago Shakespeare Theatre, and a visit to the spectacular Arts Institute to see the real Seurat painting (and much more besides) the following day. 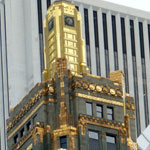 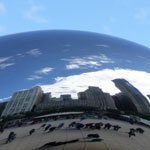 Now, this one may take rather longer to explain... In the autumn of 2008, we were due for our second tri-annual visit from the Parson Woodforde Society (Selwyn being a successor to the splendid James Woodforde, cleric and diarist, 1740-1803). Having preached at Harvest Evensong to the same audience three years previously, Selwyn was on the lookout for some fresh ideas. An internet search for 'sermon James Woodforde' yielded little help from the man himself; but it did turn up a transcript of a sermon written and preached by a Presbyterian minister in North Carolina. Selwyn enjoyed it so much that he wrote to the author to ask for permission to plagiarise his work, and casually offering the invitation that the pastor came to the UK to preach it himself. To cut a long story only marginally shorter, the pastor was able to do so: and so we made the delightful acquaintance of the lovely Keith Grogg and his wife Vivian, who duly made a flying visit in order to join us for the service, preach the sermon (Keith), play the organ (Vivian), see the churches connected with Parson Woodforde - and of course, to eat Sunday lunch in the pub of the same name. (You may wish to see the book that was created to mark the occasion, marketed as a benefice fundraiser.)

As a result of our subsequent friendship, we took Keith & Vivian up on their offer of 'any time you're in the USA, do come...' In fact, we spent the largest part of our visit with the Groggs in North Carolina, as it also gave Selwyn the appropriate opportunity to witness Christian ministry in the context of the Presbyterians (specifically, PCUSA) and to spend time working, discussing, worshipping and praying with Keith and his very friendly and welcoming congregation. We both sang in the choir on our second Sunday there, Selwyn preached, and Cassie employed her best Dame Judi accent to read the text for the day.

During our visit, we much enjoyed exploring downtown Wilmington and its riverfront; spent an evening in the company of the wonderful Mike Cross (a sort of Southern version of Mike Harding) at the magnificent Thalian Hall; Cassie was privileged to spend a day visiting a fellow professional organiser, Geralin Thomas, who was the very soul of kindness, hospitality and inspiration; and we were glad to be visited by distant relatives Tony and his wife Lisa, who live about two hours north of Wilmington. In a lovely circular link, Tony happens to be the son of Joan, whose funeral illustration photo put us in touch with Pat Parnow (see Minneapolis section). 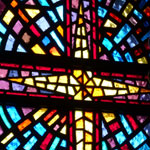 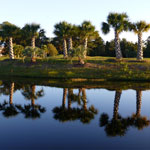 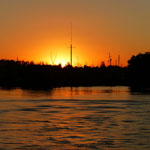 In a previous life, before training for the priesthood, Selwyn was an ancient historian. (The history was ancient, not him.) He specialised in Egyptology, and as a result, spent several enjoyable trips back in the 1980s as a lecturer on cruises on the Nile. Many of his audience were Americans, and it was here that he first met Warner & Lois Brown. Coincidentally, they had spent time in Norfolk in the 1960s, and have fond memories of our present home. We last visited them during our 2002 stay in Florida.

We knew that a visit to Mount Dora on this occasion was something we couldn't possibly omit from our trip, so we arranged to fly down to Orlando for two nights during our stay in Wilmington. Now aged 87 and 89, Warner & Lois continue as intelligent, welcoming and delightful as ever, and we had - as before - an enchanting time with them. We spent time wandering the friendly streets of Mount Dora; shared meals with them in the beautiful Waterman Village retirement community where they now live, visited their local Presbyterian church, and relished once more Warner's readings, in his beautiful Illinois accent, of his own superb poetry.

Cassie was traumatised by a photographic accident which meant that she lost several important images of this visit: taking a photograph on the day after their return from Florida, at the precise moment at which the battery died, corrupted the data card. Software assisted with the retrieval of some photos, but the most precious of them - the two couples together - was, sadly, irretrievably lost. However, the album of this visit does include some lovely images of our hosts, and some of the sights around the town. 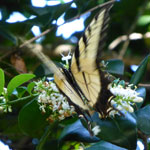 Selwyn was first in touch with John Wolfson some thirty-five or so years ago. A New York-based collector of antiquarian books, as well as a playwright, he has an astonishing collection of volumes, ranging from a Shakespeare First Folio to autograph scores of Gilbert & Sullivan operettas to early English bibles. (He has bequeathed many of these classic texts to Shakespeare's Globe on London's South Bank.) He has consulted with Selwyn on many matters both musical and theological over the years, and we've occasionally been able to meet up with him during his London visits - when he regularly delivers talks on unusual aspects of Shakespearean texts at the Globe.

As such, we were thrilled and privileged to spend two nights in The Big Apple courtesy of John's hospitality in his magnificent brownstone apartment in Manhattan. From there, we were able to visit just a few of The Sights: Central Park, Battery Park (from which we of course viewed Liberty), Broadway, 42nd Street; and our choice of show (there had to be one!) for the evening was the sublime Forbidden Broadway - which of course neatly summarised all the other shows we'd been considering seeing, with panache, elegance, chutzpah and supreme skill.

It was troubling to realise that we left JFK on the Wednesday, superstorm Sandy hit on the Sunday, and a lot of the Lower Manhattan we saw was underwater... 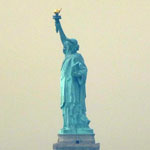 We are humbled and thrilled by this magnificent opportunity. It would not have been possible without the generosity and kindness of our various hosts, and their friends and families: their support and hospitality, their time and care. Thank you so very much to you all for what was, truly, the trip of a lifetime.